Front page from the only newspaper in Australia I would pay to read online, The Northern Territory News : 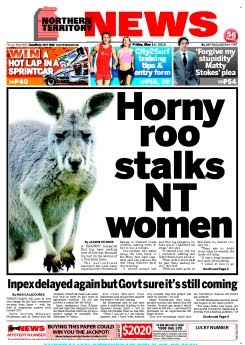 Yesterday's front page was even better : 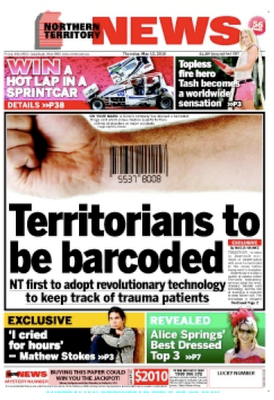 Territory victims in large-scale accidents or catastrophes will soon be barcoded at the scene before being sent to hospital.

The technology is designed for major catastrophes which involve more than 10 victims.

Royal Darwin Hospital director of disaster preparedness Dr Ian Norton said it would put the Territory at the forefront of major emergency responses in Australia.

"It's the holy grail of disaster management," he said.

Disaster or large scale accident victims will be given cards, with barcodes on them.

But I read the whole story. So it worked. The few moments of 'Wait, nobody's going to be forced to get barcodes tattooed on their arms and/or foreheads?' disappointment faded because it turned out to be an interesting story anyway.

Pretty soon the Northern Territory News is going to find a way to combine two of their most popular front page subjects - UFOs and crocodiles. At least I hope they do. I know they can.

UFO and crocodile (sighting, attack, wrestling, death roll, walking upright) stories bring the NTN the kind of international traffic that makes jaws drop across the rest of the 'serious' News Limited newspapers, like The Australian and the Daily Telegraph. Why the rest of Murdoch papers don't raid the NTN mercilessly for stories and headlines is a mystery. Why Fox News, for example, doesn't have a chunk of a show devoted to rounding up a week's worth of NTN's WTF? news and outback wisdom and madness is just bad business.

Anyway, soon the Northern Territory News will run a front page claiming that crocodiles are being abducted by UFOs, or better yet, that crocodiles leaped up and grabbed a low-flying UFO and caused it to crash, and I'll be ordering a copy of that front page, laminated.

To add to the collection : 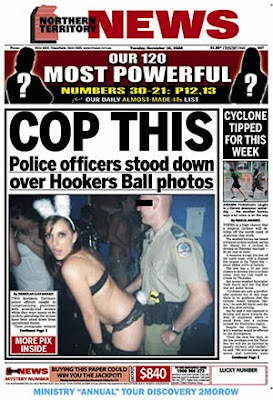 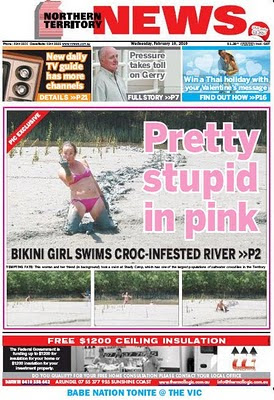 I love that a g-string eating dog takes news priority over some guy getting smashed in the head with a television set. As it should : 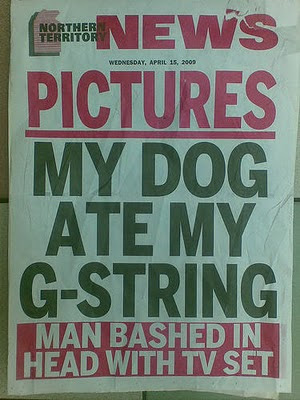 Still one of my favourite news stories of 2009 : 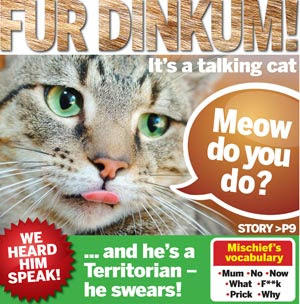 That's how you sell newspapers.

And by the way, that cat can talk, and if yours doesn't, well, that's probably because you don't love it enough.