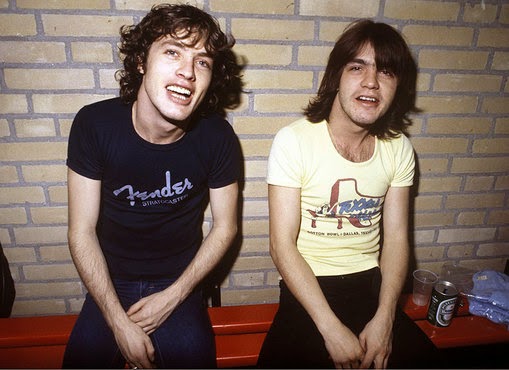 In one of the most personal interviews he's ever given, AC/DC's Angus Young has opened up about his brother Malcolm, now in a Sydney care facility suffering from dementia.


"It's something that had actually been happening for a long time," Angus Young told Rolling Stone magazine, meaning Malcolm's lapses in concentration and ability to remember riffs he'd written was failing as far back as 2008, when the band recorded the Black Ice album.

"(Malcolm was) still capable of knowing what he wanted to do. I had said to him, 'Do you want to go through with what we're doing?' And he said, 'Shit, yeah.' "

Touring through 2008-2010 saw Malcolm receiving treatment on the road, and had to re-learn some of the band's most famous songs, which, Angus said, "was very strange for him. But...we made it work."

But then, "with the condition he got in, that kind of faded."

Malcolm and Angus Young had been writing for a new album since 2008, and all the songs on the new album Rock Or Bust are credited to the brothers, Young-Young, but Malcolm didn't play on the new album. Rhythm guitars are supplied by Angus' cousin Stevie Young, who used Malcolm's guitars and amps.

Singer Brian Johnson revealed the future of AC/DC, beyond unspecified touring in 2015, is all up to Angus Young. He decides now if the band continues beyond next year.

It certainly seems drummer Phil Rudd, recently arrested in New Zealand, and rumoured to be fighting drug addiction, won't be joining AC/DC on tour. Rudd turned up for the album recording sessions in Vancouver, Canada. But, claims producer Brendan O'Brien, Rudd was 10 days late, and was almost replaced there and then.

Angus Young told Rolling Stone, his brother Malcolm "still likes his music. We make sure he has his Chuck Berry, a little Buddy Holly."

The same music the brothers Young grew up listening to, when they dreamed of becoming famous musicians and taking on the world.

A dream they've both lived to see become reality.

The Full Rolling Stone Story Is Here
Posted by Darryl Mason at 5:52 AM