Abbott On D-Day Anniversary: Now Can We Get Rid Of The Carbon And Mining Tax?

Australia's PM Tony Abbott, or 'Toxic Tony' as he is becoming known, used the 70th anniversary of D-Day landings in Europe during World War 2 to talk up his agenda of cutting the carbon tax and mining tax. And he used images of Australian World War 2 veterans to do it.

This is a media release issued around midday on Sunday, June 1, 2014: 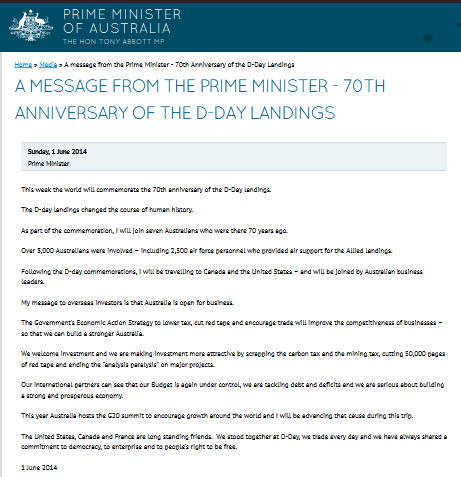 Here's the transcript of the above:

"This week the world will commemorate the 70th anniversary of the D-Day landings.

The D-Day landings changed the course of human history.

As part of the commemoration, I will join join seven Australians who were there 70 years ago.

Over 5000 Australians were involved - including 2500 air force personnel who provided air support for the Allied landings.

Following the D-Day commemorations, I will be traveling to Canada and France and will be joined by Australian business leaders.

My message to overseas investors is that Australia is open for business.

The Government's Economic Action Strategy to lower tax, cut red tape and encourage trade will improve the competitiveness of business - so that we can build a stronger Australia.

We welcome investment and we are making investment more attractive by scrapping the carbon tax and the mining tax, cutting 50,000 pages of red tape, and ending the 'analysis paralysis' on major projects.

Our international partners can see that our Budget is again under control, we are tackling debt and deficits and we are serious about building a strong and prosperous economy.

This year Australia hosts the G20 summit to encourage growth around the world and I will be advancing that cause during this trip.

The United States, Canada and France are long standing friends. We stood together at D-Day, we trade every day and we have always shared a commitment to democracy, to enterprise and to people's right to be free."

See the way Abbott has used World War 2 bravery and sacrifice to set up the next part of the media release? This is called 'activating emotional triggers.' Mention World War 2, trigger emotions, then deliver your political agenda.

And this is the re-issued press release.... 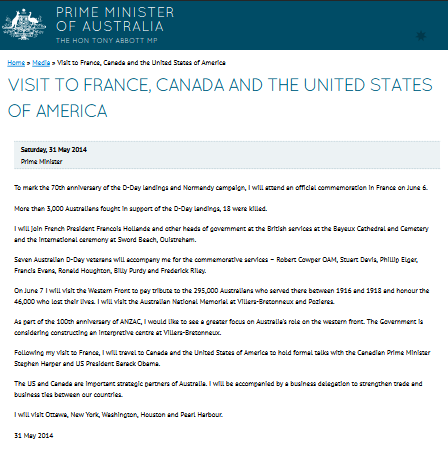 ....note it has backdated to May 31, to give the impression that this was the intended media release, to fit in with Abbott government MPs now trying to claim the 'D-Day To Carbon Tax' release was "just a draft." The reissue has been stripped of his blatant anti-carbon tax and anti-mining tax agenda items and business-related rhetoric.

The original media release was not "just a draft", it was issued to 1000s of journalists and other media around the world, direct from the Prime Minister's Office.

The other proof it wasn't "just a draft" is the fact that PM Abbott actually recorded a YouTube video of his media release, and it included historic photos of World War 2 veterans, before switching over to his political agenda and right-wing propaganda.

That video, also titled 'A Message From The Prime Minister - The 70th Anniversary Of The D-Day Landings' was posted and made public, and links publicising it were sent out on Twitter and Facebook. It was only after Twitter lit up in shock and disgust, the video was retitled and then finally pulled. 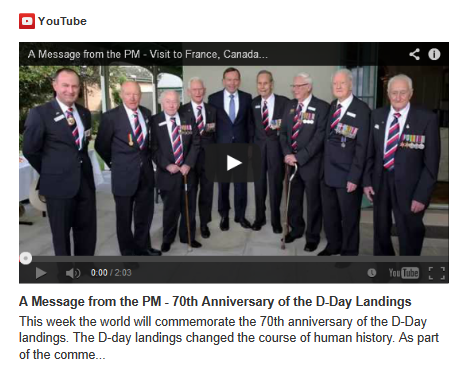 The title was changed to 'A Visit To France...' but the original title remained the redo, as seen above, and in Google search, and archives. Here's a copy of that original video:

The original media release is a perfect example of tawdry, cheap and cynical exploitation of World War 2 and its veterans by the prime minister. Our Australian veterans. That the Prime Minister's Office is trying to spin Abbott's way out of this disgusting use of veterans to push his political agenda just makes the whole thing even worse.

I spent every Saturday for almost three years, with a wonderful, kind man who was at the D-Day landings, and all this makes me feel extremely ill. He's gone now, but I can only imagine his reaction at seeing Australia's prime minister exploit his sacrifice and the sacrifice of his friends and colleagues in this crude, tacky way.

If you still don't get it, Abbott was using words and imagery of brave men from World War 2 to trigger an emotional reaction in the reader, and viewer, of his written and video media release.

This is an ugly, utterly cynical PR technique to soften you up with emotional triggers, so that what follows - his agenda relating to the axing of the carbon and mining taxes, cutting of red tape and "open for business" propaganda - will lock into your emotions, will etch his messages into your thoughts and memory. This is why the 'D-Day To The Carbon Tax' media release begins and ends with lines about the D-Day landings and World War 2.

The veterans got 5 lines, his right wing, IPA think-tank propaganda got six paragraphs, in a release headlined '70th Anniversary Of The D-Day Landings.'

It was an attempt to purposely link events from World War 2 with his current agenda, and make you feel less opposed to his plans, and his Budget. And also to pressure his political opponents to dropping their opposition to his policies.

It was extremely purposeful.

They did exactly what they intended to do, Abbott read it all aloud in a video, and his office only changed it all around when people were literally repulsed and sickened.

Think about the political agenda, the PR techniques, the emotional triggering, behind all this the next time a politician tries to use past wars to ram through whatever the people are currently opposed to. It's a foul, odious and downright dirty trick. Exploiting war veterans to push unpopular political agendas has been used before, and no doubt it will be used again, as long as politicians aren't held to account and made to pay for this kind of emotional abuse.

It's hard to believe Tony Abbott hasn't announced his resignation.

Instead, he's going to tour World War 2 cemeteries and memorials in Europe, and pose with veterans for photos and hold media conferences to cash-in further, to further plunder the D-Day anniversary for his political ends.

'This is the way it's always been,' some might say, 'this is what politicians do.' That doesn't make it right.

They will stop doing it, when the public says, "Enough."

Tony Abbott: What A Scumbag Part One

Abbott Attacks Australians For Demanding The Very Best From Their Politicians