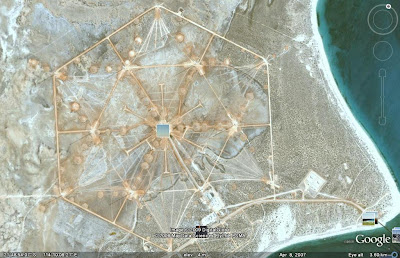 A Google Earth image of the Exmouth military base discussed in the below story.

I've been mulling over ideas for a long-short fiction story about UFOs in Australia, particularly about a UFO visit to a dying country town. Googling UFOs and Australia turns up some interesting stuff, some of it mundane, some of it apparently unexplainable, and some of it downright loco.

Whatever they are, there sure are a shitload of reports about UFOs zipping, zapping, whipping and zooming across Australian skies.

Naturally, the government knows all about it.

According to this site the UnOpposition leader Malcolm Turnbull is "keeping mysteriously quiet on the topic" of UFOs. I think that means he was momentarily stunned into silence when quizzed by a stranger in the street about The Great Australian UFO (You Know Something! Tell Me!) Cover Up :

Michael Cohen, of All News Web, happened to chance upon Mr Turnbull and ask him a few questions regarding UFO related topics, probably the first time he was asked anything on the topic by any media outlet.

Some of his answers were startling.

On whether he would disclose what the Government knew about UFO and Alien visitation and contact with humans he was rather evasive, claiming he wasn't sure they knew anything and if they did they weren't telling him or anyone he knows.

Then he made the surprise revelation: "That information would be above top secret, highest classification of secrecy". This was a truly remarkable comment. He also mentioned that 'Australia hasn't had its Roswell yet' to which our reporter replied 'That's not exactly true.'

When asked if he believed earth is being visited by Aliens and whether he believed in UFO's he simply reversed the question and asked our reporter if he did. Yet the impression gained was that he knew more than he was prepared to give away.

Typical Turnbull. Full of secrets. Fun secrets. I want to see Kerry O'Brien on the 7.30 Report hammering Turnbull about his top secret UFO knowledge and their secret bases in Australia.

And maybe Turnbull can be quizzed more thoroughly on what he knows about the recent mid-air incidents with Qantas jets and how they are not what they appear to be. If you really fire up the imagination, you can clearly see that UFOs had to involved :

Both incidents occurred in almost the exact same spot over the mysterious town of Exmouth in Western Australia. The town happens to contain two highly restricted military bases as a well as the Learmonth Solar Observatory which is also used for planetary defense including ionosphere monitoring and meteor detection and tracking: A great cover for actual UFO related activity.

The Naval Communications Station Harold E Holt is notoriously secretive regarding its activities and reportedly denied any connection to the events. Even Less is known about the RAAF base Learmonth or the very secretive Learmonth Solar Observatory: tellingly managed by the US Air Force. Almost nothing is known of the NASA established Learmonth Magnetic Observatory, now also under US Air Force control.

The question must be asked: Is Exmouth Australia’s Area-51 and are UFO’s either being monitored from here or even using a landing base in the region as a stepping stone for exploring earth?

Yeah, it is a question that must be asked. Someone has to go after Turnbull again, he sounds punchy when people start demanding UFO discolsure from him. He must be made to detail the truth about Australia's Secret UFO Earth Exploration Terminal & Lounge Bar at Exmouth, with all those alien spacecraft landing strips cleverly disguised as dirt access roads for radar tower engineers.

At Katoomba, in the Blue Mountains, there used to be this amazing little museum (under the revolving restuarant, near the Three Sister lookout at Echo Point) that featured wall displays of newspaper reports, illustrations and sometimes even photos of supposed local sightings of UFOs, big cats and Yowies.

To a six year old, learning that wild, ravenous panthers and tall, hairy monster men roamed the mountains was fairly mundane stuff. I already knew from watching Leonard Nimoy hosting Great Mysteries Of The World on Saturday afternoons that monsters stalking urban-fringing forests was no big deal, in the United States, England or Australia.

But that little Echo Point museum also went into great detail about (naturally) top secret UFO bases operating freely in the isolation of the Blue Mountains. They were hidden inside some of the mountains, if I remember rightly, and huge slabs of cliff face would open so massive alien aircraft could zoom into the clouds, all but undetected by earth-based lifeforms.

Even at six years old, the bullshit alarm beeped a little as I wandered that pokey little museum, but what fantastic imaginative fuel it was to feast on before going to the lookout to search the trees and cliffs for just the faintest sign of those UFO base entrances, and exits, that I truly hoped were actually there.

That little museum, and its fantastical local tales of alien spacecraft and forest monsters, long gone now, always made those family trips to the mountains just that little bit more exciting.

I lived in the Blue Mountains twenty years after those family visits, and I saw a lot of weird, unexplainable shit late at night, up there, but most of it involved locals stumbling home from the Gearins Hotel. And I never accidentally came across any entrances to secret UFO bases either, on any of the many long walks through the bush. Not that I was really looking...