In images below, you will find the first lengthy newspaper report published in London, in March 1789, of the First Fleet arriving in Botany Bay in January, 1788. Scattered across other early 1789 issues of the Times of London are letters, editorials, blasting the sending of "slaves to New Holland." Debate raged on whether it was right or wrong to participate in the "white slave trade" when other countries were beginning to abolish such servitude. The morality of human cargo was quite the dinner table conversation amongst the London establishment.

The account below, and rewrites of it in other London newspapers of the era, was published to spread the 'good news' about what England was doing in a yet another 'new land', on the other side of the world, already inhabited and in use by First Nations people for 'untold centuries'.

This can be a little difficult to read, remembering that some of the letters that look like 'f' are actually 's'. It's worth reading it a few times, your brain will adjust. 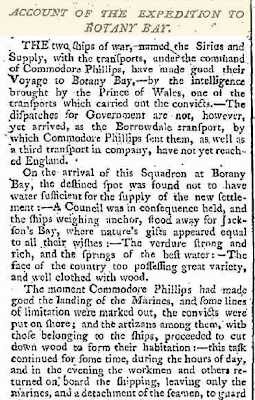 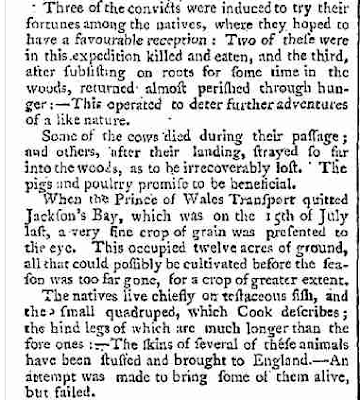 While the "natives" are barely mentioned, do note in the above passage the use of convicts as human shields for the officer class in first attempts at communicating with people who clearly wanted to be left alone, and how the deaths of two convicts, and near starvation of the third, were used as Examples to other convicts on what would most definitely happen to all of them if they tried to run away before building the new town.

Some animals on board were smarter. After seeing their fellow cows die "during their passage," the cows that landed in the new land were out of there straight away. They bailed. They didn't know what their futures held out there, but they wanted to be as far away from First Fleeters as possible:

"...after their land, strayed so far in the woods as to be irrecoverably lost." 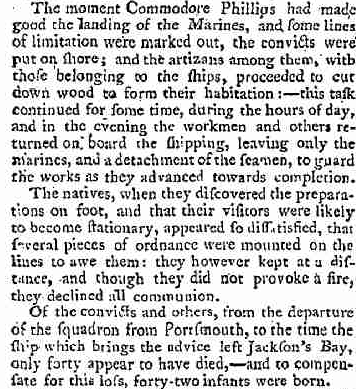 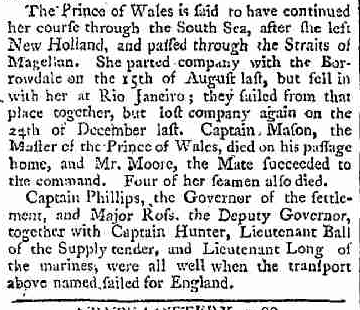 That was the first major, detailed, newspaper story, such as it is, of how the First Fleet landing and the beginning of the English and European occupation had unfolded. This Times of London story would have been read and absorbed, at the same time, for the first time, by royal family members, bankers, politicians, lawyers, traders, doctors, the sprawl of English establishment, along with 1000s of the literate poor.

The above story was the first and lasting impression of what this newly invaded land had to offer. The Narrative was set, in print, and in patriotic legend.