The Australian Coup : Does Kevin Rudd Know Something We Don't?

In the Twitter reality, Kevin Rudd is still prime minister of Australia, and was not deposed in a coup on that began one week ago, on the morning of June 23. 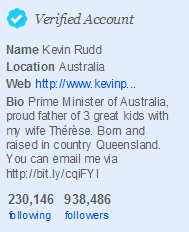 Shortly after the coup, the 'Verified Account' tick disappeared from the @KevinRuddPM page.

@KevinRuddPM is still posting updates to his 930,000 or so followers on Twitter about moving his family from Canberra back home to Queensland : 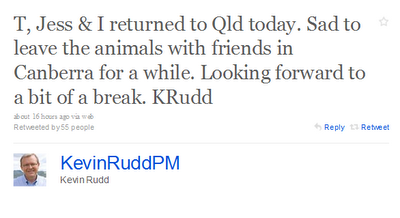 For nearly a week, Australians have been posting messages to @KevinRuddPM on Twitter pouring out their shock and disgust at what happened to the prime minister they believed they elected, and had the right to vote out at the next election if they weren't happen with his performance.

The messages are a portrait of a country, outside of Canberra and the mainstream media, where support for Kevin Rudd as prime minister remained in the majority, and his literally overnight disappearance as their leader remains mostly a mystery. How can they his happen in Australia? they ask, over and over. Aren't we a democracy? Don't we get to choose our prime minister?
What have they done to you? What have they have done to this country? 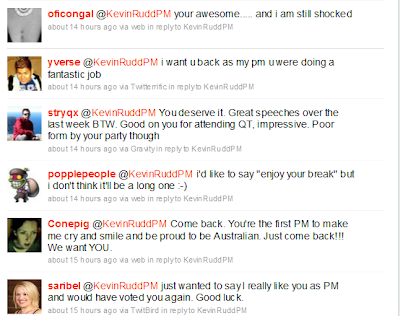 As far as most of the media here are concerned, however, this official approval of the coup from Rupert Murdoch is all that needs to be said : 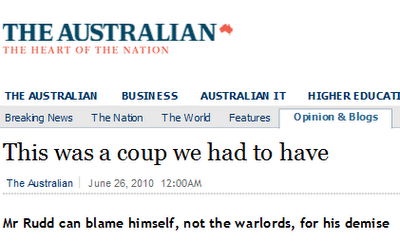 But millions of Australians don't agree. Labor politicians are acknowledging "the anger out there" over the coup, but they've done little to address it.

If Julia Gillard doesn't round up Labor voters lost thanks to bitterness, anger and bewilderment over the coup, they're going to be in real trouble.

Last night, Julia Gillard attended a function in Brisbane. She must have been thanking whoever you thank when you don't believe in God that the protesters weren't holding up 'Bring Back Kev' signs :